Do you ever read a post and think I wish I had thought of that? This week’s Blog Friend Feature makes me have moments like that all the time. She’s so incredibly witty. She managed to snag a fabulous writing job… just from her hilarious tweets. It takes skills to impress people that much in under 140 characters.  Though, today, you get to see her in full effect: Meet Kelley from Kelley’s Break Room.

“When Crush crushed me”

Before I start blabbing my mouth right off, let me thank you, Shell, for having me in the BFF chair.  This is truly an honor!  Nice chair!  Like so many of us, I have been touched by your words and stories and am grateful that you are sharing your space with me today.

Much time was spent trying to figure out what kind of post to write.  The posts on my site are 98.9% not serious and mostly have to do with silly topics like misnamed neighborhoods, song parodies, Spanish-speaking manatees, Mister Rogers and games, like Captcha Balderdash and Name That Job.  Given that Shell’s posts are uplifting many times, I decided to mix some serious and some silly.

For my son’s 5th birthday in October 2009, we took him to Disney World at Halloween.  My husband dressed up as Darth Vader, I was Princess Leah and my son was a Storm Trooper.  We left our baby at home with my parents with his Ewok costume.  Like everyone else, we had a really great time, although my son did keep asking, “When we are done with ____, can we go back to us hotel and go swimming?”   WHAT IN THE HECK?

Perhaps I had the most fun acting like I was in the paparazzi.  I kept getting distracted by ladies with big wings.  These pair of wings were spotted in line for the Jungle Cruise: 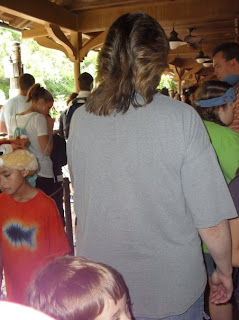 Ladies with ridiculous Disney-walking shoes like these below also distracted me: 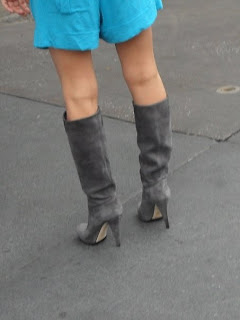 And especially these below.  Goodness gracious alive.  I had to chase this lady down to Pooh’s “Hunny Pot” to take this picture.  I’m pretty sure I had to perch one foot on an old stranger’s fanny pack and the other on Billy Bob’s gut to get it, too. 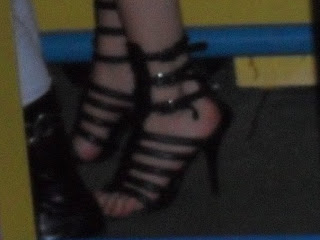 My cheerful mood soon plummeted, though.

I actually LOVE Epcot.  It has always been one of my favorites of the various parks. You might think my day went south when my Norwegian chocolate melted or when I compared myself to the belly dancer in Morocco or when I didn’t have time to finish my margarita in Mexico (which, let’s be honest, all are true), but that wasn’t it.
It was when we were at the Turtle Talk With Crush show.

I don’t really blame him.  His behavior was typical and was not malicious.
But still.

﻿
My very young 5-year-old, who really looks almost 6 given his height, sat right up front with all of the other kids while my husband and I sat in the back.  Crush, the big turtle from Finding Nemo, swims around in his tank and interacts with the kids through some hocus-pocus computer magic.  He “sees” the kids with their hands raised and encourages them to ask anything they would like.  It is such a fun, fun time for everyone!﻿﻿

Unless your son is speech delayed.

His brand new 5-year-old little hand was raised as high as it could reach.  He didn’t get picked out of the 6 times he probably lifted his hand.  He begged to go through the line again to see the Crush show again once the show was over.  He wanted so badly to have a chance to talk to that turtle.

He was oblivious to his communication difficulties.

During the second show, after raising his hand probably 4-5 times, Crush picked him.

The whole room was staring at him.  I was holding my breath.  And cringing.  I was happy he wanted to talk to Crush and was brave enough to raise his little hand, but knew this interaction was probably not going to be pretty.

My son said something.

No one understood him.

Crush was staring at him like he was Dory or something.


Dagger in my heart.

“Duuuuuuuuuuuuuuuuude, I’m having trouble here understanding you, dude.  Hahahahaha!!!”  Crush was joined by a bunch of other “hahahahahahaha”s from the crowd.

Crush tries one more time to have my son repeat his question.  This time he asks something that everyone somehow understands this time.  He asked Crush, “Do you wear a hat?  Do you burp or toot?”


I was so very relieved that Crush caught any of the words my son said, even if they happened to be “burp” and “toot”, because I knew that one more failed communication attempt would definitely be noticed by my little guy.  He would have been crushed at that point, too.

It was clear throughout their little interaction that Crush was trying to get some laughs at my son’s expense.  I wasn’t really upset with Crush at all.

My heart just hurt for my son.

He was still smiling, though.  Beaming, actually.

He is still smiling about it.

Please leave Kelley some comment love here and then go follow her blog if you don’t already!
Parenting Do’s and Don’ts: Part 2
When a Girl Has Nothing to Wear