We’ve already been through that scare lately and with three little boys, we are DONE having babies.

But, that doesn’t mean we don’t debate other additions to our family.

I’ve never been a dog person. And my oldest is scared of dogs. And we don’t have a fenced in yard right now.  So, the idea of a dog was not one that we considered.

It was a thought for “some day.”

And then we started talking about moving. Not far, but to a different house in a different neighborhood. One where we would have a fenced in yard.

And then two of the boys’ uncles got dogs.

And oh, those sad little faces from my youngest two. And Hubs.

So, I started thinking okay, once we move, we can have a dog. For me to even give in to that was a huge concession.

But, somehow that turned into let’s look at dogs right now. 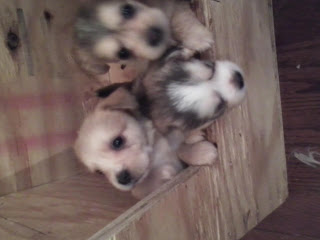 And we saw these adorable puppies. Even I had to admit they were darn cute. And oh, how the boys seemed excited.

Really, what’s the difference between getting one now and waiting a few months?

How the boys were begging… except the oldest, of course.

But then I realized.

*I* was the one who wanted this dog the least of anyone.

And I was the one who was going to be responsible for it. As much as we could say that the boys would help, they are still young. It’s not like they could do all that much. Especially not the two youngest, who are the ones who want the dog.

And Hubs? He’s not home that much.

This would be something else for ME to do.

I have enough messes and poop to deal with, without adding a dog to all that.

So, I squashed that idea.

At least, until we move.

Does your family have a pet? How did you decide to add one to an already busy family?