The boys are in their new bedrooms. Baby Cub(which you all know as Mason now) is in his own room with a toddler bed.

The big boys are sharing a room and they are currently sleeping on these Cars inflatable mattresses that the have for camping. They’ll have their bunk bed soon.

I have two total Mommy Moments for you about where my boys sleep.

The first happened back in PA, with Monkey, when he was about 3.5. He had two toddler beds in his room, since the little boys were both in cribs in the next room.

He decided that he was too big for a toddler bed and informed us, “You have to get me a bunk bed because I’m too big for these baby beds.”

Well, we told him that we would get one for him, but not right then. That bunk beds cost money and we would save for one. Even told him that he could help by saving money in his bank. Total stall tactic. We just weren’t ready for him to have a bunk bed.

Very seriously, he told us, “Well, I’m going to sleep on the floor until you get me a bunk bed.”

And so he did. Right in the middle of the two beds. He actually slept like that for months in protest. Side note: he really wasn’t too big for the beds.  He’s just that stubborn. He gets that from his dad. Ahem.

Not a problem, it’s not hurting anything for him to sleep there.

Until, one day, he walks into his preschool class and announces to his teachers, “I sleep on the floor because my mommy is saving money for my bed.”

OMG. I wanted to die.

Time for child #2 to embarass me. Bear, who decided for whatever reason in our beach house that he liked to pile pillows in his closet and sleep on top of them with his blankets.  Again,whatever. As long as he’s sleeping and not hurting anything, I let it go.

He’s at his pre-k assessment and they show him a picture of a bed. He correctly identifies it.

But, then, later they are asking him, “Where do you go when it’s time to go to sleep?”

My eyes open wide in horror. They want to know if he knows what a bed is for.

He responds, “My bedroom.”

They keep prodding, “What do you need to go to sleep?”

He tells them, “Mickey Mouse blanket.”

I start to think that just maybe he’s not going to tell the assessment team that he sleeps in a closet.  And start to get some of the color back in my face.

They keep prodding, but thankfully, he moves on to tell them “This dinosaur roars!” and they decide to move to the next question. Whew.

Just found out the Mason made the final round for Bob 93.3’s Baby Idol contest- thanks to all of you! Please vote for him this week 1x per day per computer. Contest ends 5pm EST Friday afternoon. Thanks so much! 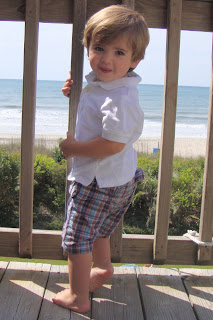