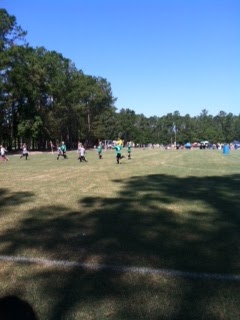 It’s official: I’m a soccer mom.
My two oldest boys are playing soccer while my youngest thinks he should be playing.

We are at the field three nights a week for practice.

And then of course, games on Saturdays.

Bear’s team started practicing two weeks before Monkey’s team because Monkey’s team didn’t have a coach yet. And then some of the parents were up in arms about the practice days and times so we had a meeting to discuss that… and then finally, a practice.

His first practice was on the same day and time as one of Bear’s practices.

Hubs came with us, since we knew we’d have kids on two different fields plus a little one who either wanted to be on the playground or who would be trying to play soccer with one of his brothers’ teams.

Bear took off for his team and Cub made a dash for the playground. So Hubs said he would get Monkey to his practice.

They were a couple fields away and I squinted over at them. I didn’t see the coach that I had met at the meeting the week before. But, there was only that night and one more before their first game, so I thought maybe the coach couldn’t make it and the assistant was running the practice.  Or maybe I was just remembering the coach wrong.

Afterwards, Hubs talked about some of the kids who were really big and who were really good. I shrugged it off because his peers could have been playing for 3 years already, while this is Monkey’s first season.

I handle the next practice and everything seems just fine.

First game comes and Hubs looks at the coach and asks me if I’m sure this is the right team.

As we are leaving after the game, we walk past another team playing, who has on the same color shirts as Monkey’s team(there is a “Knights” who wear gray in each age group- so you could stay on the same team/have the same color all the way up if you wanted).

And Hubs asks me again if I’m SURE that Monkey had played with the right team.

YES. That was his coach, those were the parents I met at the first meeting. Monkey’s name was on that roster.

But, the team we were walking past was the team that Monkey had played with at that first practice. They were the Knights all right. They just weren’t the U7 Knights. They were the U8 or maybe even U9 Knights.

No wonder Hubs had thought Monkey looked so out of place at practice!

I’m just glad that for once, it wasn’t me who screwed up.

Don’t forget that the Magic Moments linky is open thru Monday 9/19. Share your photos for a chance to win a $400 camera or one of 3 $50 gift cards.

Sharing Those Magic Moments
Pour Your Heart Out: I Miss My Friends