You know how last week, I was telling you all the odd things that I was screaming at my boys?

Two of them being:

Don’t hit your brother with a shovel!

Stop hitting your brother with a shovel!

And then I reassured you that they were made of plastic.

What I neglected to tell you is just how big those plastic shovels are.

Here’s Bear, showing them off on Christmas morning: 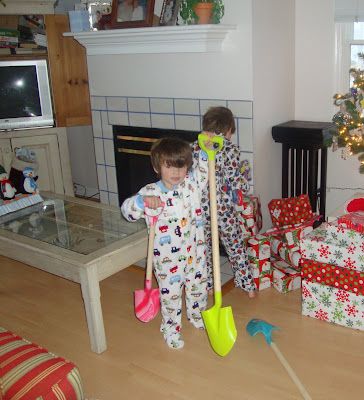 What was Santa thinking????

Now, my boys do love each other.

But, they also love to beat up on each other.

They actually are very good at not hurting any other kids, just their brothers.

Well, unless they are just retaliating, but that’s another story.

Last summer, we were over at a friend’s house for a playdate.

Quite a few families.

But, all of them either had just one child or they had girls.

So, maybe it’s a boy thing.

Or maybe it’s just my kids- though I doubt it, since I see this with other families that have lots of boys, so I’m going with “it’s a boy thing.”

I stepped inside for something- probably to change Cub’s diaper, since I know I had him with me inside.

When I came back out, Monkey and Bear were fighting.

They were wrestling, rolling around on the ground, and hitting each other.

The other moms were sort of staring at them, mouths hanging open.

“They’re going to hurt each other!”

And tried to change the subject.

I got looks of disbelief.

And many comments about how they would break it up if they were their kids, wasn’t I worried, they couldn’t believe my kids were acting like that, and on and on.

But, I have come to accept that I cannot break up every little fight that my boys have.

If they are doing something where they can really get hurt, I’ll step in.

No biting allowed, I’ll stop that.

If it’s not just them, but other kids, absolutely, I’ll step in.

Or even if they are just too close to other kids while they’re fighting, I’ll stop it.
Or just have them move away from others.

We DO talk about how we shouldn’t hurt each other.

How it’s mean and hurtful and we don’t want to be the type of people who would do things like that.

But, I think that brothers are going to fight.

And sometimes, you have to let them fight it out.

You might feel differently and break up every single fight that your kids have. I applaud you for your fabulous dedication and wonder how on earth you manage to be able to do that.

But, as for me, occasionally, I let my boys fight it out.

Just not with these shovels.

Looking for a Good Read? Some Keepers and Stinkers
Silly Sundays: Where Are Your Pants?