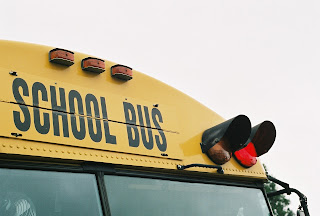 When my oldest started kindergarten last year, I wasn’t worried about how he would do in school or if he would get lost or if the day was too long for him: I knew he’d be fine.

But, one thing that did worry me was the bus.
I had all sorts of concerns: would my child get on the right bus? Would he get off at the right stop? Would there be bullies?
I decided I’d drive my son to school because we had to go past it on my way to drop off the preschooler. But, in the afternoons, pick-up was in the middle of my youngest’s naptime.
The school is only about a half mile from our house: if the road between our neighborhood and the school weren’t such a twisted back road, he’d probably be a walker.
The school pick up line was long and my youngest was a giant crab if I woke him up from his nap. So, my oldest started riding the bus home.
After about a month, he started telling me stories about mean fifth graders who tried to get him to give them his lunchbox and another child who spit on him while they were waiting to board the bus- and the teacher who waved him off when he tried to tell her. He said he didn’t have any friends on the bus.
And then my youngest decided he’d give up naps. So, I began picking up my child every day.
This year, with my crazy drop-off/pick-up schedule of having three kids in three different schools, all with various pick-up times with lots of lag time in between each, I asked my now first grader if he’d like to ride the bus home. And make my life easier as I was already a crazy mom-taxi the rest of the day.
But he was adamant that he did NOT want anything to do with the bus. I sighed, rolled my eyes, and tried to bribe him otherwise.
Until I realized that whatever, it’s not a big deal, I’ll keep picking him up.
So, imagine my surprise last week when he asked me if he could start riding the bus home.
I did a little dance of glee and told him of course.
Even though on the second day of him riding the bus home, the bus driver didn’t see him: the school bus went roaring past my house without stopping to let my child off. I called the school, where they told me that my son wasn’t there, that the bus must be dropping him off and not to panic.
The bus did drop him off, but it was after finishing the rest of the route- my son was the last one to get off the bus instead of one of the first.
I was starting to freak out and yet, he thought it was awesome. Plus, he told me that now he has friends on the bus and he likes riding it.
But, when he got home on Friday on time this time, he informed me that he got his ice cream, so he was done riding the bus.
Huh?
Apparently, the buses had had some sort of competition the week before, with the winning bus getting an ice cream treat on the way home one day this week. And the bus that goes through my neighborhood had won.
My little sneak had heard about this and decided he wanted in on the reward. Thus, his request to ride the bus home.
But, now that the reward was given, he was over the bus and wants me to pick him up again.
Sorry, pal… ain’t gonna happen.
Do your kids ride the bus or do you play mom-taxi?
Things They Can’t Say: Letters for Lucas
Pour Your Heart Out: Remind Me