I’d heard a lot of talk about Nutella on twitter- mostly from people who seem to love it. But, I had never tried it until recently. 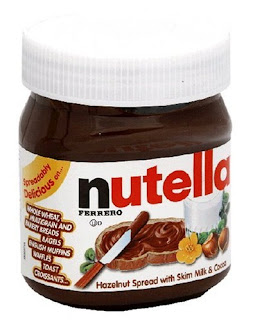 MommyParties sent me a party pack with Nutella samples and coupons, tumbler mugs, nutella spreaders, breakfast tips and other info cards for guests, as well as a jar of Nutella to use in recipes.

The idea behind this MommyParty was that breakfast is the most important meal of the day and that a little Nutella could encourage your kids to eat breakfast. A little, like 1-2 tablespoons.  I wouldn’t just hand my kids the jar of Nutella and let them have at it.

A little Nutella on a whole-grain waffle or English muffin might make them more likely to eat their breakfast: you can then top the Nutella with fresh fruit.

Another idea, one that I made and shared, is to spread a whole wheat tortilla with Nutella and then put fruit on it and roll it up. Dried fruit like cherries and apricots were suggested, but I tried it with fresh strawberries and it was a hit!

I’ve also made Nutella cookies– not that this has anything to do with breakfast, but they are SO GOOD.  Another way to enjoy Nutella is with pita chips. Someone on twitter suggested cinnamon sugar pita chips, but I used salted one and love the combination of the salty and the sweet.

Just a few facts about Nutella:

Have you tried Nutella? What do you think of it? How do you use Nutella?

You can click here to get a $1.00 off coupon for Nutella.

Thank you to MommyParties for sending me a Nutella party kit. All opinions are my own and I was under no obligation to blog about this.