The first time that I saw that double line show up telling me I was going to have my first little baby, I was a little surprised, even though we’d been trying. I didn’t think it would happen that quickly.

The second time I saw that double line, I wasn’t shocked at all. After all, the day before, I had decided that I wanted a huge glass of milk and chugged it down. I never want milk unless I’m pregnant. So, I barely glanced at the stick: I knew what it would say.

But, with my third, I looked at the double line and thought This thing must be broken. And so I did another test. Hmmm, this pack must be defective.

And so I bought a different brand and tried again the next morning. Okay, I guess I’m really pregnant.

We weren’t trying at the time. We also weren’t doing anything to prevent a pregnancy, so we weren’t not trying either. Three or four kids was always our plan.

But, I had also just returned to work (part-time) for the first time in almost three years. Which is how I justify not realizing that I’d actually missed two periods by the time that I took a pregnancy test. I tried to insist that I’d just missed one- which led my OB to think that perhaps I was carrying twins since I was measuring big.

When we found out Cub was only one baby, just due about a month or so sooner than I thought, I was relieved. I had been panicking at the thought of having four children under the age of four. Three under four was scary enough.

Cub’s birth was the easiest of the three. Since my other two had been born very quickly and we were living 45+ minutes away from the hospital, I was induced with him and given a blessed epidural, unlike my first which was natural and my second where there was enough time to give me a little something, but, nothing like the epidural, which allowed me to be a lot calmer than with my other two.

It was two years ago today that my little Cub was born. Why do I call him Cub? Because of all that hair! He looked just like a baby bear.  Look at my cute little newborn. 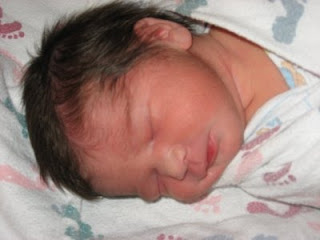 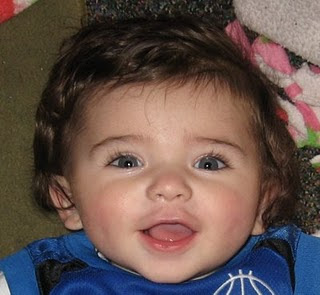 And in a blink of an eye, he was one: 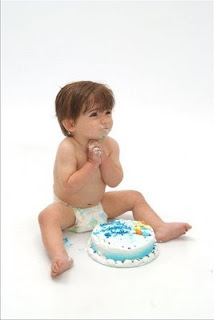 And I vowed not to blink any more.
But, somehow, my baby is now 2. 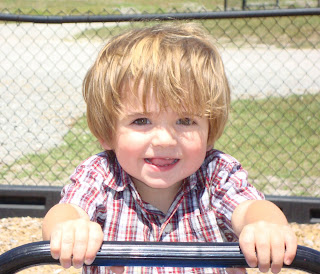 If you ask him how old he is, he tells you THREE. I try to correct him and tell him TWO, but he insists that he is three already.
And with that, I realized that I don’t have any more babies in my house. That they are all growing up so quickly. The baby gear and clothes are slowly all making their way out the door.
There will be no more pregnancy tests with double lines in this house, no more anticipation of a new baby’s arrival. No more first smile, first time rolling over, first time sitting up, first crawl, first spitting out of baby food, first step, first sleeping through the night, first word.
Now, it’s lasts. Last firsts. The last time that I get to see one of my babies hit a milestone for the first time.
I think I understand why the baby of the family is forever treated like, well, a baby.
So, my dear Cub, I know you want to grow up quickly and be able to do all that your big brothers can do, but please forgive Mommy for wanting to keep you as a baby for a little while longer.
Because you are my last baby. Happy 2nd Birthday, Cub!
Pour Your Heart Out: Too Many Glasses to Count
Milestones: I’m Not Mushy….