I’m really not all that crafty.

I would love to be, but I’m really such a mess when it comes to things like that.

Plus, I’m scared to ever let my children anywhere near glue again.

So, when the challenge from the SITS Girls was to share something that we created for Halloween, I was a little stumped.

Do you know what we created this Halloween? Probably the worst memories for our kids. We created yet another thing they can blame us for later, when they are complaining to their therapists.

Because on Friday night, we took them to a pumpkin patch.

Yes. In the dark. Through the scary woods. With crazy monsters that jump out of the woods and JUMP UP ONTO THE WAGON AND SCREAM AT YOU.

Or, slam their chainsaw down on the hay bale next to you.

Whose idea was this anyway?

Though, my 2 year old thought it was hilarious and laughed the whole time. And my 4 year old took it all in stride, even when the Grim Reaper tapped him with his death sickle. Or whatever that thing is called. Until the chainsaw guy popped up right in his face. Then he freaked out.

My 5 year-old hated the whole thing. From the very beginning when the creepy voice warned as as we were going into the woods that we shouldn’t enter. “Mommy, he said not to enter. Why don’t we turn back?” And then he tried to boss all the monsters around, telling them to get off our wagon and leave us alone.

My kids were far from the only ones on the hayride and not even the youngest. The three year old beside us ended up on the floor of the wagon, with his blanket over his head.

I don’t think that the haunted hayride will be something that we do anytime again until our boys are teenagers at least! Because I really don’t need to create any more traumatic memories for my kids.

And after we frightened our kids- here’s a treat for them, too:

This is a treat that I’ve made for several Halloween parties. Because kids get enough candy. Make peanut butter sandwiches with Ritz crackers, then insert pretzel sticks for legs. Attach raisins with pb for eyes. There you go- a cute Halloween spider treat. 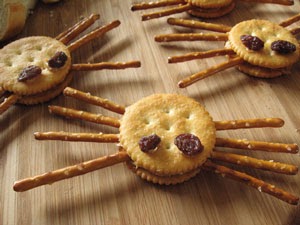