Several weeks ago, my Bear had a huge turning point at preschool.  Instead of hearing about what he had done wrong in preschool that day, I heard that he had good days.

He was excited to go to school.  And the credit goes not to his teacher, but to his friend Emily.(This is not her name, doesn’t sound anything like her name, but was what he thought her name was for a few days, before he figured out what her real name is and is what I’ll call her in this post b/c she is not my child.)

Emily and Bear adored each other.  She was very patient or maybe a little bossy, but in a good way, and helped him to stay focused at school and do what he was supposed to be doing.

They were just so cute together.  They were the ones who started the flash mob on their preschool field trip. 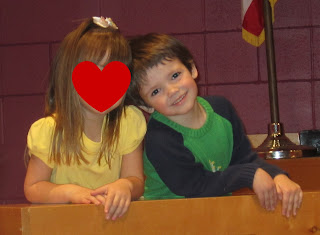 Again, not my child, so no pics of her on my blog, but I promise you that her smile is just as big as Bear’s.

But, last week, he got in the van after school and said through tears, “I can’t be Emily’s friend any more.”

“I can’t, I can’t, no more friends with girls,” said with a very emphatic head shake.

But, I let it go.  Because when he gets his mind set on something or starts getting upset, it’s really best not to push him.

Until, he stopped wanting to go to school.  He started getting upset about having to go and saying that he didn’t have friends.

His teacher asked me if I knew what happened between him and Emily.  So, I decided to push a little further and see if I could get an answer from him.

I admit, I had a strong urge to shake Meanboy.  Really, why does this boy-girl split have to happen so young? Are preschoolers watching when Harry Met Sally? And if so, how do you explain that scene in the cafe? That Sally’s food is just really good?

I went into the preschool the next day to tell Bear’s teacher that Meanboy had told Bear he wasn’t allowed to be friends with Emily any more.

His teacher had a sharp intake of breath and then said, “That’s not true.”

I paused for a second, in shock.  My Bear is far from perfect.  However, he does not lie; making up things like that is not something that he is able to do.

But, then I realized she was talking to Bear after she told him that Meanboy shouldn’t have said that and that Bear is allowed to be friends with Emily.  And she told me that Meanboy tends to tell people a lot of things that aren’t true and tries to boss everyone around.

They had a talk and now Bear and Emily are back to being friends and Bear once again is excited to go to school.

And he’s back to asking if he can have a sleepover with Emily. We can’t win as parents, can we?

In case you are new around here, my Bear suffers from lead poisoning, which has many effects which cause him to have a difficult time in a school setting.

Pour Your Heart Out Anniversary Prizes: Winners!
Can Men and Women Be Friends?