After I wrote Out of My Comfort Zone: A Life-Changing Decision,  where I told you about how I accepted my first teaching job at the age of 22 and moved to a town where I knew no one and had only spent a few hours,  some of you wanted to know what happened next. Well, the truth is that I adapted rather easily at first- I jumped right into teacher workdays and then teaching. I had those dream classes that only come along about once in a teacher’s career.  My principal had nothing but good things to say about me. I made friends, went on dates,  and explored the area. It was much easier than I ever thought.

But, I guess nothing can be that simple. Because then the hurricanes came.

After I followed my dream of moving to the beach, it would just figure that I would move during an active hurricane season. When you don’t grow up on the water, plus you’re too young to really pay attention to the damage hurricanes can cause(this was in 1999, way before Katrina) you have no clue what to expect.

I had been in North Carolina for a little over a month when I had my first experience- with Hurricane Dennis.  Since I lived right on the water(soundside- a first year teacher’s salary didn’t rate beachfront), my teaching partner invited me to stay at her house. Dennis was downgraded to a tropical storm, but was very slow moving, bringing up to 15 inches of rain to the area.

A few weeks later, Hurricane Floyd was forming. It was a very strong Category 4 hurricane—just short of the highest possible rating—on the Saffir-Simpson Hurricane Scale. It was among the largest Atlantic hurricanes of its strength ever recorded. 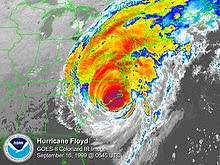 As it continued its path toward North Carolina, I was starting to panic, not knowing what to expect. I was at school late, finishing up cheerleading practice(yes, I coached cheerleading. Shut up. Stop laughing), when there was an announcement over the PA system that school was going to be cancelled for at least the next two days, giving us a four-day weekend.

I asked some of the other teachers who were still around what they were going to do and the consensus was that they were all leaving town and that we should all hurry because once everyone starts evacuating, roads would get crazy.

So, I headed home, packed a few things- though left most- because sheesh, I wasn’t on the OCEAN after all. And there was a good 30 feet between the back of my place and the water…it couldn’t be that bad, right?  I mean, it’s just a little rain and wind….

My teaching partner was out of town and I was told that we would need to evacuate even there anyway. So, I headed back to my parents’ home in PA. I needed somewhere to stay for several days, so I went where I didn’t have to pay to stay.

Floyd triggered the third largest evacuation in US history (behind Hurricane Gustav and Hurricane Rita, respectively) when 2.6 million coastal residents of five states were ordered from their homes as it approached.  There became no such thing as 95S- those lanes were turned into northbound lanes to accommodate all the traffic.

Though Floyd didn’t hit with as much force as was predicted, it did produce up to 19 inches of rain. The storm surge from the large hurricane amounted to 9–10 feet along the southeastern portion of the state.  Combined with what Dennis had already left behind, there was lots of flooding. Some of the worst of it didn’t happen until weeks later, when other parts of the state flooded from the rising rivers.

I watched the Weather Channel in fascination, safely far from the storm. After it was over, I spoke to the owners of my condo, to see if there was any damage.  There was flooding of about two feet in my place. And though they were going to fix it,  it was going to take a while.

I was in shock. I hadn’t really believed there would be any damage to my place. It had been fully furnished, so most of the damaged items weren’t mine: just clothes, personal items, a desk, and a tv. But, just about everything was ruined.

My family couldn’t believe that I would even consider going back.  To them, since I had no place to live,  I shouldn’t go back. I should quit my teaching job, stay “home,” and try to find a job there.

It never even crossed my mind to do that. By this point, I’d been in North Carolina for about two months and already had friends whom I knew would let me stay with them until my place was fixed. I had a job that I loved. I was going back.

And so, once again, I found myself making a trek from PA to NC, again being completely unsure of what I’d find.

It took two days to get back  to NC,  having to take a very circuitous route to get back, since there was a lot of flooding. Though the waters had receded from my place, you could see the water line on the walls, about two feet high.  It was completely unlivable, though some of my clothes were salvageable. I found a friend to stay with for a few days and then stayed with my teaching partner and her son for about a month until my place was redone.

While I’d been apprehensive about the initial move to NC, once I was there, I was that sure that I’d found my place.  And ten days after that hurricane hit, my life was about to take another major twist.

*I did get some hurricane facts and the image from Wikipedia. That way I didn’t just say “a really big, scary hurricane with a whole bunch of rain.” I’m so technical like that. Any inaccuracies are due to the fact that I’m not a meteorologist. Go easy on me.