Motherbitches: what the mean girls of junior high turn into when they grow up and procreate.

It’s been a while since I’ve told you one of these stories.

This most recent one comes to you from my church’s fall festival.

Because yes, Christian women can still be motherbitches. 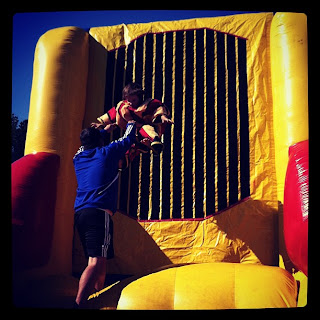 Last weekend, we went to our church’s fall festival. They really go all out. So much fun for the kids and everything is free. It’s a great way to get people in from the community who don’t usually go to our church and maybe have them give it a shot.

We’d been there for an hour or so when Hubs took off with our oldest to go on a hayride with some friends, leaving me with the two littles.

Bear and Cub were bouncing away in jumpy thing(that is their technical name, I think). But then Cub slid out and wanted to go on the big slide beside the jumpy thing.

I walked him over, keeping an eye on Bear jumping.  I helped Cub get up to where he’d climb the rungs to get to the top of the slide… even though he’s gone on bigger slides, people usually see his little peanut self and assume that he couldn’t climb that and wonder where his mama his. So, I was right there.

But, while I was right there for Cub, Bear decided to dash out of the jumpy thing and run over to the firetruck  that was parked a little bit away and climb right on in, ignoring the line of kids who were waiting.

I could have shrieked at him from where I was… but really, it probably wouldn’t have done anything at that point but cause a lot of people to turn and stare at me.

So, I waited til Cub went down the slide and we went over to get Bear out of the firetruck.

As we approached, these two moms were talking. I vaguely recognized them from Bible Study. As I called for Bear, one of them stopped, turned to me and said “Oh, that must be his mother.”

And then she turned back to her friend and said “It’s a shame when people don’t pay attention to what their kids are doing and ruin it for everyone else.”

I had to literally bite my tongue to stop from saying “Way to show Jesus to the community, bitch.”

He’d RUINED it for everyone else?

And not paying attention?

I did see him, I just couldn’t get to him fast enough.

It’s one thing to be a mom who just sits there and doesn’t pay attention to what her kids are doing. Who doesn’t care if they are doing something wrong.

There are plenty of those- who would sit down eating fried snickers bars(OMG, can you believe I didn’t eat one of those?) and let their kids run wild all over the festival. Or who would think that their child cutting in line was perfectly acceptable.

Did one of mine get away from me for just a minute? Yes.

But, damn, I got to him and got him out there.

Excuse me for having a 20 second parenting lapse.

Things They Can’t Say: Mama Wants This
Pour Your Heart Out: When I Can’t Be Upbeat