On Monday morning, I took my boys to the church where my middle son went to preschool last year. The one that my youngest will attend this fall.

It was time for Vacation Bible School. VBS. Where I can drop off my kiddos and have three glorious hours of quiet each day without feeling guilty about it, since they are off learning and having fun and all that good stuff. My boys need Jesus, you know.


I knew my oldest would be fine.  I wasn’t sure about my 3 year-old because I hadn’t even known until that morning that they had a class for his age. But, he was fine.

It was my 5 year-old Bear that I was the most concerned about. He’s a total sweetheart, but things aren’t always easy for him. And I always worry about just how much I need to explain to an adult who is going to be in charge of him.

But, when we got to his group, I saw that his girlfriend was there.  The one he started a flashmob with on a preschool field trip.

He went and sat down with her, big hugs all around, and I knew he would be fine. 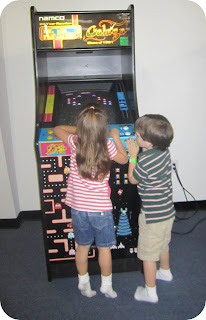 One of the few ways I feel comfortable sharing a pic of someone else’s child on my blog.

They are best buddies and she helps him so much. Some of that help is because she can be a little bossy and he adores her so much he’ll do whatever she says, but I’ll take it.  I left with no worries about him.

On Tuesday, I went to go sign him out from his group and the leader of that group told me that he had been moved to another group that morning.  They ended up with a lot more 5 year-olds than they had planned on, so they split the kids up and created a second group.

My panicked eyes flew to the new sign out list, quickly scanning down the sheet. Phew. Bear’s girlfriend had been moved to the other group with him.

I gave a relieved laugh and said, “Oh, I’m so glad you moved Bear and Bear’s Girlfriend together.”

An eyeroll was the response that I received.  When Bear was told to go to the other group, he and his girlfriend grabbed hands and headed to the new group together. They were told no, Bear was moving, but Girlfriend was not. They stopped, kept holding hands, and refused. So, the wise teachers decided not to fight it and let the two be together.

I could be embarrassed that my child wasn’t listening and doing as he was told. But, I’m not.

Instead, I’m taking a lesson from him.  He has someone whom he sticks with. Someone who holds his hand and helps him. Someone he has a blast with.

And he wasn’t about to let anyone separate them.

Yes, they both play with others. And they don’t have to be together all the time.

But, when it comes down to it, they have that person that they want with them. And they aren’t letting go.

I think we should all have a friend like that.  We might not always be together, but when it’s important, we stick together.

Pour Your Heart Out: A Screaming Mama
Blog Friend Feature: The Mommy Matters