Just a few months ago, my little Bear….

He has always been such a sweet little boy.

But, he really struggled.

Even the big “A” word was tossed around.

All as a result of an illness that he had.

No one could tell us if the effects would go away as his body healed or if there would be permanent neurological damage. Just typing those three words makes me want to throw up.

I tried my best to hold it together during the day, but I would go into his room when he was sleeping, run my fingers through his hair, and pray for God to heal him. And cry. Wanting him to be “normal.” Wanting everyone to be able to see the sweet little boy that he is.

Bear, on his first day of 3 year-old preschool.

He would try to express himself, get frustrated that he couldn’t, and sometimes bite someone.

He’d try to tell us things, but couldn’t really string many words together. Unless he was singing. It’s the reason I tolerate the weirdness of Yo Gabba Gabba. Their songs helped us communicate with our son.

He’d cover his ears and leave the room if things were loud.

You could call for him and it was like he couldn’t even hear you.

And not in the same way that my other boys might choose to ignore me.

He really couldn’t hear me.

Getting him to do simple things like sit down or walk with his classmates in a line were impossible for him.

He wasn’t trying to be difficult or defiant.

It was just beyond him to be able to do those things.

Even trying to get him to cooperate enough to be able to be evaluated by the early childhood interventionists was near impossible. They weren’t sure what to do with him, since they couldn’t really tell us any results that they considered valid. So, all they would suggest is that we retest him in a few months. Over and over again.

We all understand him now.

He speaks in long sentences.

He answers when you ask him a question.

Sometimes he says or does things that his older brother would get in trouble for, but we laugh and hug him. Excited that he CAN say these things.

He is able to sit and participate with his classmates.

He can hear you when you call for him.

Sometimes he might choose not to actually do what you tell him to, but it’s a choice, not an inability to process what you are asking him to do.

He still has some struggles, but he is healing.

It’s like he is a completely different child from who he was just a few months ago. 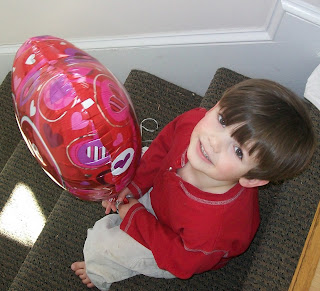 Bear, on the day of his preschool Valentine’s Day party

I’m typing this with tears in my eyes.

He went through another early childhood intervention screening recently. I watched from another part of the room as he sat at the different stations, following directions and talking to the evaluators. We only hit one small bump, because they had over-scheduled the evaluations and at one point, he had to play for about a half an hour before moving to the final station. By that point, he was tired and wanting to play and didn’t cooperate.

But, that was only one small segment. And I think it’s even understandable for any three year-old.

The results of that screening told the team that he did not need to come back to undergo the full screening. Not unless I, as the parent, had additional concerns.

Because I like to be on the safe side and I’d rather he get additional help now if he needs it, and because his score was not much above their cut-off point for needing to have further evaluations done, I did tell the team that I wanted to bring him back for the full evaluation. That is where we are headed this afternoon.

I still worry about him. I don’t know if I’ll ever stop.

But, I know now that he is getting better. And pray that in time, there will be no lasting effects from his illness.

Click HERE for other people who have to tell you the story behind their pictures.
Snow in Coastal Carolina
Mommy Moments: Boys, Bras, and Boobs