Wednesday, December 8th, 2004:
I am ginormously pregnant with my first baby. Have to make it through this week, plus two days of teaching next week and one teacher workday before it is Christmas break. Baby is due on the 20th, but doctor keeps saying that I could have a Christmas baby or asking if I want to induce on the 31st if the baby isn’t here yet.

Uncomfortable. Only a few of my maternity clothes still fit. Wearing slippers at school and glaring at anyone who would dare to suggest that I can’t.

End of grading period standardized testing going on. Pissed that my assistant got taken away to help in another classroom with testing. This means I must go almost 5 hours without being able to go to the bathroom. Worried that pissed might be more than just an expression.

Standardized testing ends after 2 hours. Assistant Principal walks in right then. I think he’s there to collect my testing material, but he is there to observe me teaching. I glare and tell him my students just got done with two hours of testing- I was just going to give them a break. He tells me this is fine, but I know it’s not. So, I subject my poor fifth graders to a math lesson.

Meet with AP after school to go over my evaluation. Start off the meeting by informing him, “I have NEVER received any comments in ‘areas of improvement’ and if you wrote anything in that box, I will be writing a rebuttal and filing it with the county office.” Smart man has nothing but kind words to say about my teaching.

Thursday, December 9th, 2004:
Go into work and decide that this is all a bunch of crap and that tomorrow will be my last day. I’m too uncomfortable and tired to be working. Besides, we had just moved that weekend- it would be nice to be able to get unpacked before the baby comes.

Inform Principal of this decision. She’s not happy that she will have to find a sub for the two days before Christmas break. Tells me I must have a doctor’s note. Completely irritated because this is not true. I have the leave days, I can take them if I want.

Go to the doctor’s office and tell them I need a note stating that I’m about due and that I will not be working any more. Receptionist rolls her eyes at the situation, but helps me out.

Friday, December 10th, 2004
Triumphantly plunk that note onto the Principal’s desk. Stay after school until 5pm to get everything ready for next week.

Jump(literally jump) around Sam’s Club as Hubs and I browse and I say I’m tired of being pregnant. Go to a late dinner. Then to the 10pm showing of Ocean’s Twelve. Fall fast asleep and don’t see more than the first 10 minutes of the movie.

Then home to bed. Practically cry because Hubs bought us a new bed and it’s too high for my pregnant self to easily get in or out of. Fall asleep quickly.

Saturday December 11th, 2004
Wake up at three am, feeling ill. Won’t describe it, but let’s just say I was in the bathroom and it wasn’t pretty. Can’t get comfortable. Drag a chair into the bathroom. Having contractions, but never anything regular.

7am: decide that this hurts and I don’t care that the contractions aren’t regular, it hurts so bad that I need to go to the hospital NOW. Wake Hubs. He thinks he needs to shower first. We try to get things ready for the hospital. No clue why this all takes so damn long or why we thought we needed to do any of it. Only live about 10 minutes from the hospital, less than that at this time of day.

I am making these primitive, instinctive grunting noises. In so much pain. Notice that Hubs is going the back way to the hospital. I dig my nails into his arm and tell him he can’t go that way. There are speedbumps that way and this baby will come out if we go over the speedbumps. Scare Hubs. Even more than he already is.

8:20: Being pushed in a wheelchair to a delivery room. Still not officially registered at the hospital and will not be until after my baby is born. Nurse telling me to stop making those noises, stop pushing. I beg for drugs.

Am checked. Fully dilated. Too late for anything to help with the pain. But, they do give me pitocin to make the contractions regular.

9am: Doctor arrives, breaks my water. Tells me to push.

9:11am: My oldest son is born. He is the most perfect thing I’ve ever laid eyes on.

My world is changed forever. 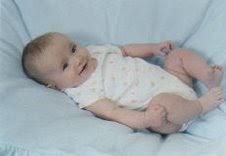