Do you know what today is?

He went from this… 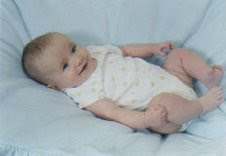 and then straight to this… 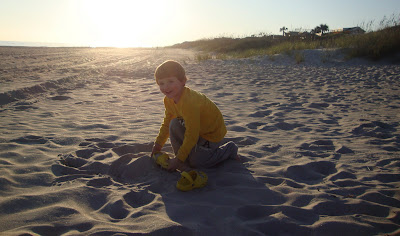 Or so it seems to me.

It was just yesterday that I stomped down the hall of the elementary school where I was a teacher, threw open the door to the principal’s office and informed her that that I did not care that there were still 3 more days of work next week and that TODAY was my last day. Find a sub for me because I ain’t coming in. My big ol’ preggo self was DONE.

Good thing I gave her the heads up, since I had Monkey the very next morning.

Woke up in the middle of the night with lots of painful contractions…that never, ever got regular. So, until I was in excruciating pain, I didn’t think that I needed to get to the hospital.

Woke up Hubs and told him we had to go NOW…and then wanted to strangle him for wanting to take a shower before we left.

Digging my claws into his arm on the short drive to the hospital when I realized that he was taking the back way there. “DON’T GO THAT WAY! THERE’S SPEED BUMPS THAT WAY! I DON’T WANT TO HAVE THIS BABY IN THE TRUCK!!!!”

Fully dilated by that point, they didn’t even have time to technically admit me to the hospital before Monkey was born. I had him about a half hour after we got to the hospital. That also means that there was time for absolutely NO pain meds.

I remember looking down at his sweet little face and wondering how anyone can hold a newborn in their arms and not believe in the existence of God.

He was a horrible sleeper, not sleeping any more than 2 hours in a row until he was 6 months old.

He crawled early, walked early, ran early, and climbed over my furniture early. Nothing like discovering your 9 month old has not only climbed up on your couch, but flipped himself over the back of it to land on your kitchen counter and finding him playing in a sinkful of dirty dishes.

When he was just shy of 17 months old, he became a big brother and took that in stride.

Instantly protective, he didn’t like when someone would try to reach down and touch his brother.

Even now, with all the fighting, no one else is allowed to touch his brother.

He’s the same with his baby brother, born when Monkey was 3 1/2. He was a little disappointed that I didn’t listen to him and give him a sister, though.

He’s a tough kid. I always said that if he ever actually started to cry after a fall, I better get him to the emergency room because he really must be hurt.

He could have adult-like conversations before he was even 2.

He’s grown up so much.

Made his own friends.

Learning to read, write, multiply(addition is too boring for him), and put together kajillion piece puzzles. He believes himself to be smarter than most adults whom he encounters. I’m working on getting him to stop telling them so.

He has an opinion on everything.

But, regardless of how old he acts, I still can’t believe that my firstborn is FIVE.

Pretty soon, none of my babies will be “babies” any more.

Someone stop me before I start thinking it’s a good idea to try for that sister that Monkey wants me to give him. Not gonna happen…snip! snip!

Monkey…is me. The child most like his mama. Which is probably why we butt heads so often.
But, I still love him with all my heart.
Wishing my big guy a very Happy FIFTH Birthday!
Not Smoopy-smoopy
Teacher Gift That’s Actually Useful