There are days when I wish for just five minutes by myself.

Maybe I could actually go to the bathroom without an audience. Or get dressed without a small boy asking me questions that I don’t want to answer about my lady parts.

Or just be able to drink a cup of tea peacefully.

But, when you have small children, it’s not really possible.

And can sometimes end in disaster.

On Thursday morning, I was feeling optimistic about a great day with Bear and Cub(Monkey was in school, of course). We were going to go to storytime at the library, and then go to the park to play and eat the lunches I was going to pack.

I didn’t even blog because I really wanted to focus on my boys, particuarly Bear since he was on his new preschool schedule of being home two days a week.

But, before I started getting them ready to head out the door, I went into my room to go to the bathroom and get dressed. I wanted to finish blowdrying my hair, too.

I was gone for LESS than five minutes.

Then I hear, “Mommy, my hands are stuck to my belly.”

Annoyed, I pull Bear’s hands off his belly, thinking he’s being a goofball.

But, it was really sticky. And I asked what he had used….

We walk around the corner to see Cub, in just a diaper, COVERED in something.

What does he have in his hands? GORILLA GLUE. 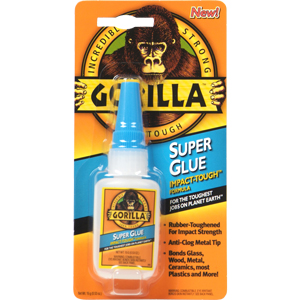 I managed to calmly ask Bear if he ate any and he told me no. I believed him.

I whisked both boys to my bathroom and immediately into the tub to try to get this off. As the water is running and they are soaking in the warm water, I dash back to the living room, grab my laptop and run back to the bathroom.

To live blog this. Just kidding.  So that I can google how the heck I can get this off of them.

There wasn’t a ton on Bear’s skin, but there were big chunks of it in his long, thick hair. Of course, close to the root. I’m thinking that he’s going to end up with a buzz cut because there is no other way to get this out of his hair.

Cub has so much on him that I really don’t even know how to begin to describe it, other than it was like a second skin, a shell. And a thick one. .

Google tells me to try vegetable oil. So, I run to go get some…and I mean literally, I was running like a crazy person.

Our couch that we got new in June. That we love because it’s so big and comfy. Hubs and I can both stretch out on it together.

But, kids are in the tub, so I grab the vegetable oil and rush back to the bathroom.

Google again to see how to remove it from fabrics.

Google informs me: BWAHAHAHAHA! Not going to happen.

I call my MIL to see if she is in town and tell her what happened. She says she will pick up some cleaning supplies and come over.

I’m scrubbing my kids with vegetable oil. It works to get the glue out of Bear’s hair. It’s starting to come off Cub’s skin.

By the time they have been in the tub for about an hour, they have both had enough, so I let them out, even though there is still a lot to remove from Cub’s skin.

MIL gets to my house and we start trying to work on the couch. We both think it’s pretty hopeless.

I start tearing up and getting hysterical. I even tweeted “Goodbye twitter. In case you never hear from me again: my boys got into Gorilla glue while I was blowdrying my hair-” and then tweet 2- I’ll break it up for those of you wondering how I could fit all this into one tweet- I didn’t- “and got it all over our new couch. Dh may kill me. It’s been nice knowing you.”

But then MIL tells me that Hubs got a warranty on the couch. I ask her if she’s sure and then start to wail that it probably only covers normal stuff like if it breaks. Not if you leave your kids unsupervised and they GLUE the freaking thing.

So, she calls him and talks to him. Because I’m like a crazy person and there is no way he would have understood what I was saying.

But, it’s true. He got the crazy kids warranty. Which covers EVERYTHING you can possibly do to the couch.

So then I burst into tears of relief. As he laughs at me for being so upset about it.

It took two days and three long baths to remove all the glue from Cub. Our couch- is a lost cause.

And those five minutes that I had to myself: SO NOT WORTH IT.

I received information about Clorox’s Bleach It Away campaign and am sharing my messy moment for the chance to win prizes from The SITS Girls. To learn more about the messy moment program, check out www.BleachItAway.com.  Sharing your story on the Clorox fan page gets you entered for the chance to win $25,000 and daily prizes, and you can grab a coupon for Clorox® Regular Bleach.